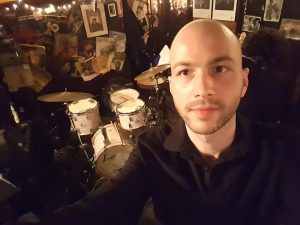 In New York City, Ilya has been leading his own band MicroCorgi with the New Orleans pianist Andrew McGowan and Japanese NY based guitarist Yuto Kanazawa. They brought out the album MicroCosmos on November 20th 2020, that has received great reviews internationally. Aside from being a drummer, he is also a composer in the band. Ilya has played in many jazz clubs in New York including the 55Bar, Bar Next Door and FatCat and played with different formations and musicians. Currently Ilya recording with the  singer/guitarist Kaleta (Leon Ligan-Majek)- known from playing with Fela Kuti, King Sunny Abe and Lauren Hill.

As a drummer , Ilya toured with the band MicroCorgi in New Orleans and Dallas in 2018 as one of the leading members of the band. In 2016 Ilya Dynov went on a European tour with the Israeli electro-acoustic band Niogi in the Czech Republic, Lithuania, Austria, Germany and played next to jazz club concerts major festivals including the Bohemia JazzFest Czech Republic and Vilnius Mama Jazz Festival, Lithuania.

Ilya has also been leading the “Ilya Dynov Group”. This group performs in New York City regularly and has been performing in Belgium and Germany in the past. He also performed with many international musicians across Europe and the U.S.A.

As a soloist, Ilya was invited 3 times in a row to perform as a at the Internationales Jugend-Musikfestival’ in Rodachtal Germany. The performances have been praised in the German press and has been described as virtuoso, astonishing and fantastic by major newspapers, among them the German major media company Infranken.de. The first time he performed the marimba concerto of Séjourné as a soloist with orchestra, the second time he performed as a vibraphone solist performing the vibraphone concerto of SaverioTasca. Because of the succes of the previouse two festivals, Ilya was invited a third time and performed in duo with a classical singer!
Next to this he was invited to perform two solo percussion concerts as well as a masterclass, invited by ‘Conservatoriu Crba’ in Beja, Portugal.

Ilya Dynov is a Belgian musician holding a Masters in Arts Degree at the Royal Conservatory of Music, Word and Dance, Antwerpen, Belgium.

Previous
Next
Scroll Up